To start your GOG journey, you need to have the following:

This is the easiest part: just go to GOG.com, hover your mouse over Sign In in the top menu bar and then click Create Account button from the drop-down menu:

Fill in the fields in the resulting form, submit the data and voilà! — you have just created your GOG account.

In order to add your own game to the GOG platform, you must obtain an account on our Developer Portal.

If you are not signed with us yet then please submit your game for review. Otherwise, please ask your GOG BizDev contact or Product Manager for access to the GOG Developer Portal.

These tools are necessary to make builds of your games for our platform. The difference between the two is in their user interface: the former is based on GUI, the latter — on command line. Simply put, Build Creator is easier to use and better for single game releases, while Pipeline Builder is recommended for build process automation.

Pipeline Builder for Windows, macOS and Linux platforms is available for download from the Developer Portal.

In case of Build Creator, there are two paths depending on the target platform: 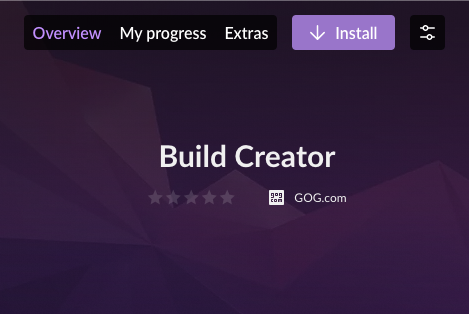 If you are using Linux, you can download GOG Build Creator from its page on the GOG Developer Portal (look for the Downloads section at the bottom of the page). We provide two options to install the build creator on Linux:

For more info on how to work with app images, please refer to the Running AppImages document.

That’s it! You don’t need any additional steps to offer your game on GOG.com — if you don’t want to offer any online functionalities to your players. However, by embracing the GOG GALAXY SDK, you can enrich your game experience with the following online features:

The GOG GALAXY SDK also allows to discover DLCs or retrieve the language of the game or DLC.